The success of Pfizer-BioNTech or Moderna COVID-19 vaccines is remarkable and was far from guaranteed. As we previously tried to explain, they contain messenger RNA (mRNA) that is an incredibly delicate molecule. To protect it, scientists turned to a delivery technology with origins older than the idea of mRNA therapy itself: tiny balls of fat called lipid nanoparticles, or LNPs.

Here we summarize the lipid shell story that was published by Chemical & Engineering News, you can find here the original article (Copyright © 2021 American Chemical Society).

LNPs used in the COVID-19 vaccines contain just few ingredients: lipids, phospholipids and cholesterol. Thousands of these encapsulate mRNA, shield it from destructive enzymes, and shuttle it into cells. Over more than 3 decades, promising lipids studied in the lab often failed to live up to their potential when tested in animals or humans.

How and when were lipid-shells born?

- in the early 1980s liposomes, hollow lipid spheres often made of just two or three kinds of lipids, were identified as carriers for cancer drugs by the nanoparticle scientist Pieter Cullis (University of British Columbia): drugs could diffuse into these liposomes and get trapped in the hollow core. When injected into animals with cancer, the liposomes would slip through the leaky vasculature of tumors, enter cells, and unleash a drug.

- Progress was slowed by issues with stability and manufacturing. The first liposome-based drug eventually was approved by the FDA in 1995, but by then Cullis and many in the field had moved on to a new challenge: using lipid particles to deliver nucleic acids such as DNA and RNA. At the time, scientists were enamored by advances in genetics that were promising to cure diseases by giving someone new genes or turning disease-causing genes off. 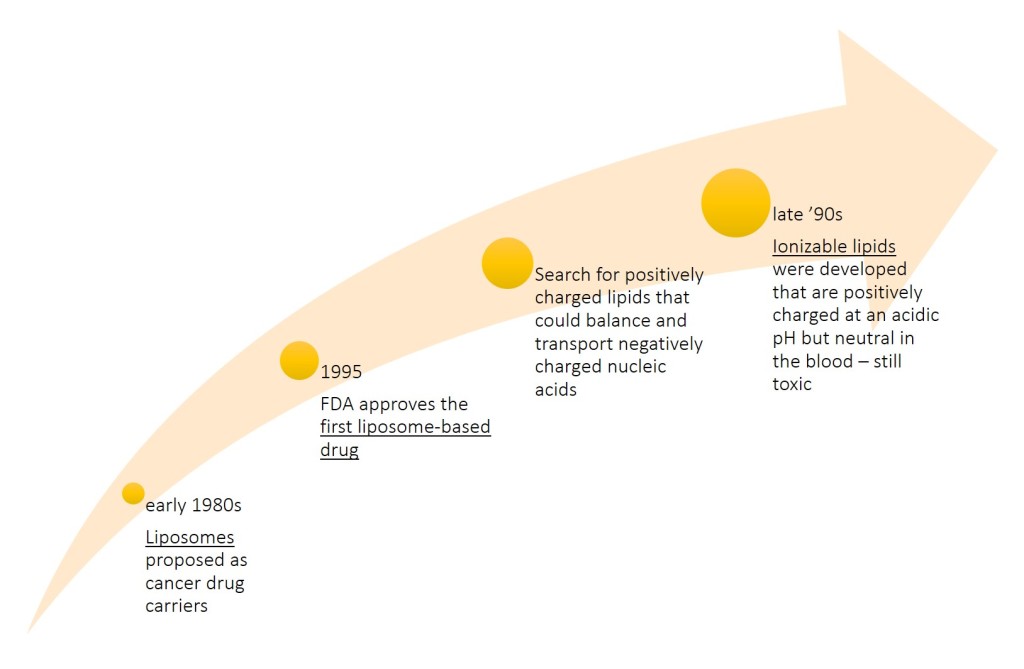 - During the late ’90s and through the first decade of the 2000s, a solution came from new lipids that were charged only under certain conditions. Cullis, his colleagues at Inex Pharmaceuticals, and the Inex spin-off Protiva Biotherapeutics developed ionizable lipids that are positively charged at an acidic pH but neutral in the blood. The group also created a new way to manufacture nanoparticles with these lipids, using microfluidics. When the lipid nanoparticles were formed, unlike the hollow liposomes, they were densely packed with lipids and nucleic acids. The process was simple in theory, but the first versions of ionizable lipids were still toxic and early formulations of the nanoparticles tended to accumulate after repeated injections.

- By 2005, the development of better and safer LNPs was driven by excitement for a new technology, called small interfering RNA (siRNA), for selectively silencing genes. Alnylam Pharmaceuticals, which became the leading siRNA company, quickly realized that existing nanoparticles were not very good at helping siRNA get into cells. The company struck multiple partnerships to make new LNPs, but lipids that made great nanoparticles in a petri dish would often flop in animal studies. Even some of the LNPs that worked well in animals proved too toxic for the repeated dosing required of many siRNA therapies.

“The biggest issue was trying to find the right balance between systems that were effective but also safe and tolerable,” says Marian Gindy, executive director of pharmaceutical sciences at Merck & Co., who led the RNA formulation team from 2008 until Merck ended its siRNA programs in 2013. “And I would say that is still the biggest challenge in this area.”

- By 2010, Alnylam had landed on a winning ionizable lipid known as MC3. Nanoparticles based on MC3 required about one-thousandth the dose of LNPs made using older ionizable lipids. Alnylam used the new formulation in patisiran (Onpattro), its treatment for a rare disease called hereditary transthyretin-mediated amyloidosis.

-In 2018, patisiran became the first approved siRNA drug and the first approved therapy delivered via LNPs. But the drug requires an 80 min infusion every 3 weeks and pretreatment with multiple anti-inflammatory drugs to minimize reactions to the nanoparticle. By the time patisiran was showing promise in the clinic, Alnylam had set most of its LNP work aside in favor of a new chemical conjugation technology that it used to deliver its other siRNA therapies subcutaneously.

- In the past decade, mRNA garnered billions of dollars of investment. Discovering how to deliver those mRNA strands into cells was a problem from day 1, but prior experience with siRNA provided a launching pad. After realizing that MC3 wouldn’t cut it for mRNA delivery, Moderna invested significant resources into building a better ionizable lipid. “There was a group of chemists put on this right away to build novel cationic lipids,” says Ciaramella, the former head of infectious diseases at Moderna. “It is kind of like a small-molecule drug discovery engine, but on steroids.” The team made about 100 ionizable lipids. Modifying the ratio of the lipids in the nanoparticles altered the LNPs’ distribution in the body.

Adaptability is the key

Once you optimize it for one organ, you can change out the mRNA with minimal optimization. For example, Moderna recently made an updated version of its COVID-19 vaccine for a new variant of the coronavirus first identified in South Africa. Now that the company knows its nanoparticle works, it can use it over and over again for different vaccines.

Now, Delivery into specific cell and tissue populations is the next challenge.

The #NEVERMIND project is working on it :)