Glioblastoma multiforme (GMB) is the most common malignant tumor of the central nervous system. Traditional treatment includes surgery, to remove part of the tumor mass, followed by radio and/or chemotherapy.  Despite advances in diagnostics and therapy, the prognosis remains very low due to its high infiltrative nature and the presence of the blood-brain barrier that prevents the entry of drugs at the brain level.

Over the years, several strategies have been tested to overcome these problems, including the loc-regional therapy that consists of depositing the drug directly in the cancer area. 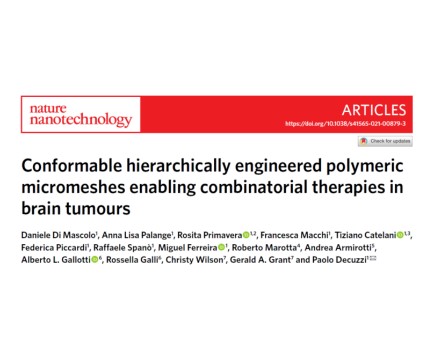 The team of researchers at IIT led by Paolo Decuzzi, in collaboration with the IRCCS San Raffaele in Milan, and the Packard children’s hospital at Stanford University has created a thin micrometric mesh, called µMesh, able to surround the tumor mass of the patient and to easily change its shape adapting to the surface on which it is deposited.

Micro mesh consists of two compartments: the first of PLGA (poly(lactic-co-glycolic acid)) where small hydrophobic molecules can be dispersed (in this study Diclofenac) and a layer of PVA (polyvinyl alcohol) where nanoparticles loaded with temozolomide are embedded. At physiological pH, the PVA layer dissolves, releasing directly the nanoparticles, which preserve their spherical shape but slightly deviating in term of size and zeta potential.

Preclinical studies have shown that the single application of micromesh is more efficient than endovenous administration of temozolanide and systemic or local administration of nanoparticle with temozolamide and diclofenac.

IIT has also confirmed that diclofenac enhances the cytotoxic activity of temozolomide. Therefore the modular, flexible and biodegradable structure together with the independent loading of different drugs and nanoparticles, represent a promising combination to improve the prognosis and can be exploited for personalized therapy.

The study was published in Nature Nanotechnology