At UniMI (UNIVERSITA’ DEGLI STUDI DI MILANO), even if we acknowledge such discoveries, we still take advantage of an old but productive treasure trove which still contains valuable gems to be polished and made available to patients:

Our tinkering with organic reactions and molecules targets mostly neurodegeneration and cancer as therapeutic areas, i.e. the same therapeutic goals shared with the NEVERMIND project. We report here some of our synthetic targets, which are aimed to different purposes but could – all of them – become suitable cargos for NEVERMIND-related clever liposomes to cross the blood-brain barrier and enter the brain of patients.

Synthetic chemistry can support the identification of novel molecular targets, or the clarification of pathological pathways, by synthesizing so-called chemical probes. They both interact with disease-related proteins and can be detected – fluorescence, photoactivation – in a cellular context, or even in a living organism.

We are actively pursuing the synthesis of probes aimed to mechanistically characterize in vivo active candidates and drugs whose molecular target is unknown. Among them, edaravone (approved drug for amyotrophic lateral sclerosis – ALS treatment), sephin1 (clinically tested for the same disease) and aza-tanshinone, a semi-synthetic tanshinone derivative from traditional Chinese medicine endowed with anticancer and immunological activities . 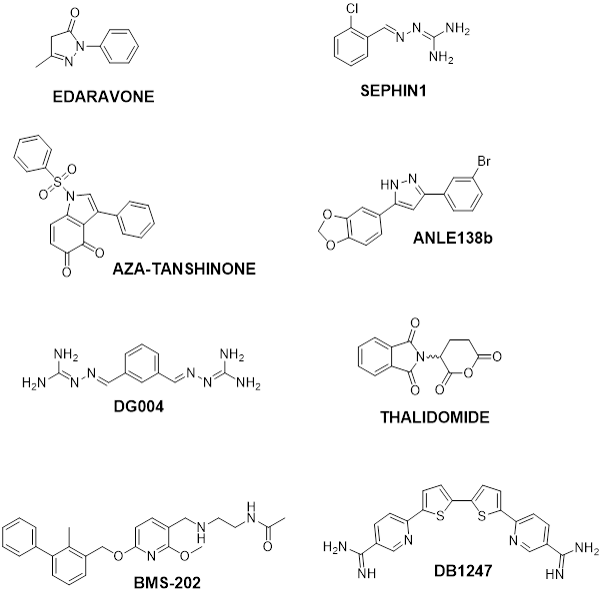 We may also synthetically combine two known, biologically active small molecules into a single dual action compound, possibly synergizing two different modes of action. The a-synuclein and prion-specific anti-aggregating agent anle138b and thalidomide, an E3 ligase Cereblon ligand, were fused to stimulate the proteasome-directed degradation of abundant oligomers and fibrils in synucleinopathies such as Parkinson disease.

Finally, rationally guided by computational models of disease-connected protein targets, we try to design and synthesize a “perfect hand” (small organic molecule) to perfectly fill and interact with a therapeutically relevant “glove” (binding site of the molecular target).

We designed and structurally optimized DG004, a chaperone stabilizer of the retromer complex capable to potently boost the degradation of toxic aggregates in vitro and in vivo in ALS models; and we are similarly working on novel, patentable analogues of BMS-202 (a peptidomimetic compound which reactivates the cancer-directed immune system by blocking the PD-1 – PD-L1 interaction between cancer and immune cells) and of DB1247 (a G-quadruplex RNA ligand targeted against c9orf72, possibly useful against frontotemporal dementia and ALS).

This page was created in collaboration with Prof. Seneci’s Lab at UniMi. 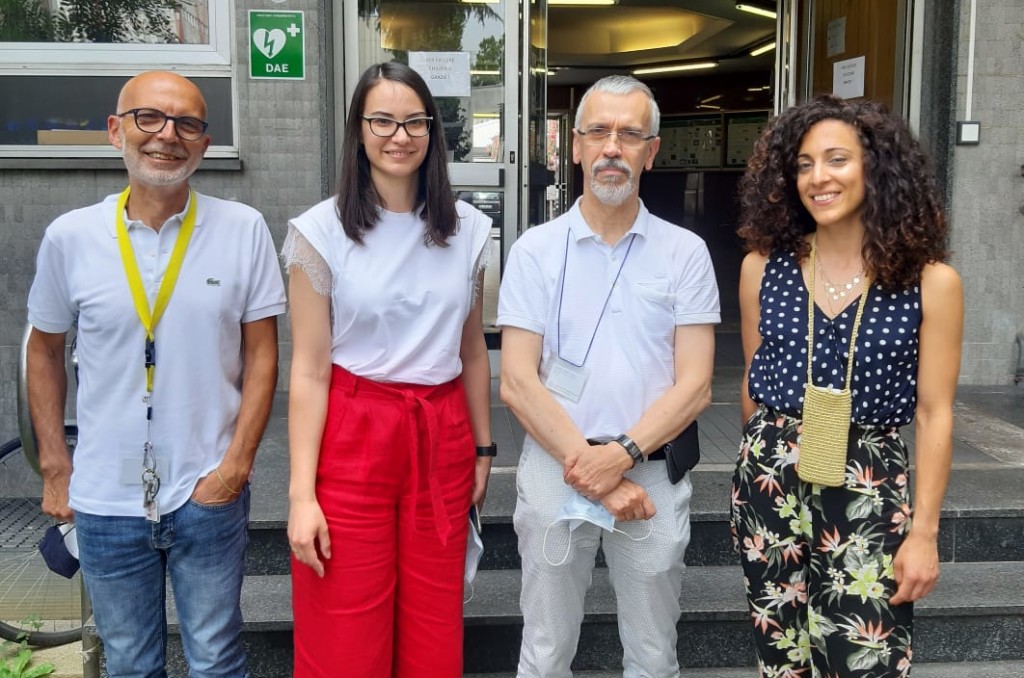 Prof. Seneci is PI of the UniMi Unit of the NEVERMIND Consortium.

In the picture, Prof. Seneci’s reasearch team working in the NEVERMIND project (from the left):