Alzheimer’s disease: new molecule that could prevent the onset of the disease

Alzheimer’s disease is a neurodegenerative disorder that affects about 6 million people in Europe and more than 30 million worldwide. Only a very small percentage has a hereditary origin. A key point in the development of the Alzheimer’s disease is the accumulation of the neurotoxic form of beta-amyloid peptide (Aβ) in the brain.

To date, unfortunately, there are no drugs that are able to stop the progression of the disease. All available treatments aim to temporarily slow the worsening of symptoms and improve the quality of life of the patients.

An Italian research group has developed a small molecule consisting of only 6 amino acids that has been shown to prevent Aβ protein accumulation in the brains of animal models with early-stage Alzheimer’s disease.

This bio-inspired approach provides, in our opinion, a novel compound for the prevention
and/or cure of AD and, in a more general context, opens the way for innovative therapeutic strategies based on the identification of naturally occurring genetic variants having protective effects in humans.

This peptide was obtained from a natural variant of Aβ (AβA2V), known to be able to block the amyloidogenesis, that is the formation of insoluble aggregates and amyloid fibrils. After intranasal administration in mouse models, this hexapeptide showed to interact with Aβ and to interfere with its accumulation.

The efficacy of the intranasal administration, confirmed by mass spectrometry technique, highlighted an increase of molecule concentration in the cortex and hippocampus 4 h after treatment. This route of administration allows to reach the brain bypassing the obstacle created by the blood-brain barrier and, in a future, an improvement of patient compliance.

These preclinical results are a promising starting point for the development of a novel therapy able to prevent the disease in humans. 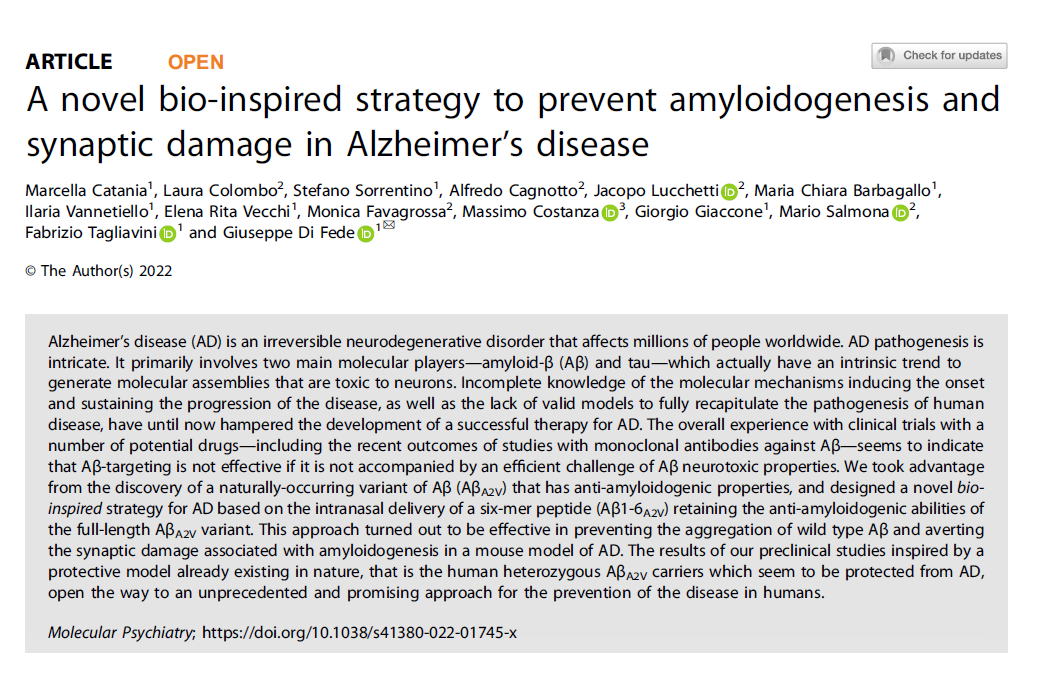