A group of researchers of University of Coimbra (Portugal), published a review describing the state-of-the-art applications of hydrogel-based drug delivery nanosystems in Glioblastoma Multiforme (GBM) therapy.

GBM is the most common and aggressive type of brain cancer and chemotherapy has, usually, limited effectiveness and unwanted side effects. Moreover, in brain tumors, the presence of Blood Brain Barrier (BBB) is an additional obstacle.

Hydrogel-based nanostructured drug delivery systems (DDS) represent a more effective and safer strategy than conventional chemotherapeutic treatment. Hydrogels are 3D structures formed by hydrophilic polymeric chains, soluble in water and their properties (stability, strength, biocompatibility etc.) can be modulated according to the use. On the other hand, nanostructured drug delivery systems (lipid nanoparticles, micelles, liposomes, nanotubes etc.) are largely used in the therapeutic field, since they can be functionalized in order to allow the BBB crossing and thanks to their ability to protect drugs against degradation.

Several nano systems have been combined with hydrogel matrices in order to obtain useful hybrid systems. They have attracted wide attention in nanomedicine since they combine the advantages of hydrogels and nanoparticles: swelling capacity, hydrophilicity, biocompatibility and stimuli-responsiveness of hydrogels and the nanoscale size, high drug encapsulation efficiency, minimal toxicity and serum stability of nanoparticles.

The first example are polymeric micelles, that are nanostructures with a hydrophilic shell and a hydrophobic core, with the ability to encapsulate poorly soluble drugs into the core. For example, a system composed of poly(ethylene glycol) dimethacrylate (PEG-DMA)-based hydrogel have been designed to deliver into the brain Temozolomide , an oral alkylating agent used to treat GBM. This system, once injected, quickly photopolymerized in GBM resection cavity.

From in silico perspective, the design of advanced targeted nanomedicines based on polymer networks and nanostructures is still a challenging task, with a broad range of physical/chemical and therapeutic properties to be understood and controlled.

Polymeric nanoparticles are another type of polymer-based nanosystem. In this case drugs can be either encapsulated within the polymeric matrix or absorbed on the surface. , Another system that has been proposed is based on magnetic nanoparticles. This system can be modulated to react to certain magnetic field gradients, generating a desired effect in the body. However, the most common system is based on iron nanoparticles, thanks to the good biocompatibility and biodegrability. Finally, lipid-based DDS are suitable carriers for the delivery of drugs, considering the poor aqueous solubility since the incorporation of this structures in hydrogels improves bioavailability and provide a sustained drug release.

All the described applications and advantages (and that is not all!) of the combination of hydrogels and nanocarriers have credited these system as one of the next generation of DDS and they constitutes a novel and sophisticated approach against GBM. 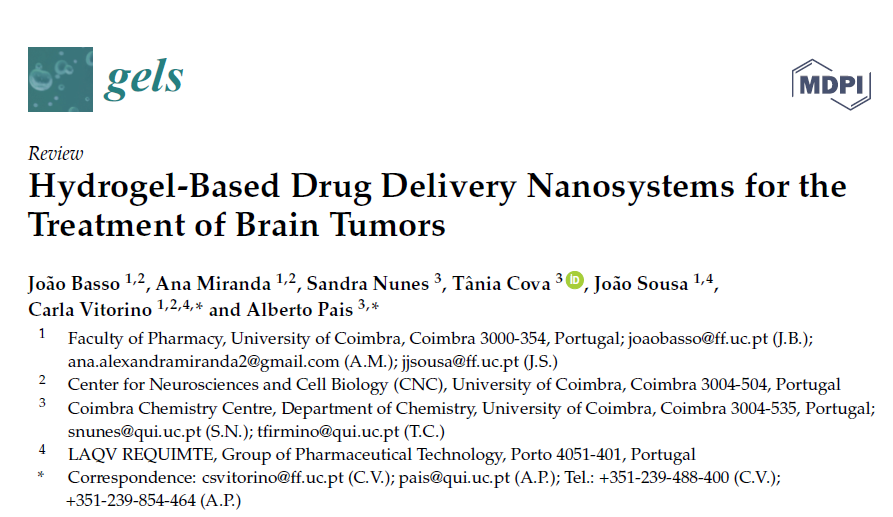