Liposomes represent one of the promising strategies for the delivery of drugs to targeted areas in the body or to hard-to-reach districts such as the brain.

These nanoparticles formed by one or more phospholipid bilayers allow for a greater selectivity towards target organs, thus reducing potential side effects and the dose of drug administered. However, a major limitation of the use of liposomes in the clinic is their recognition as a foreign object by the immune system due to the creation of a corona of proteins as soon as they come into contact with the blood.

The coating of liposomes with polyethyleneglycol (PEG), called “PEGylation”, has been widely employed to slow down the elimination, extending the permanence of the nanoparticle inside the body.

In fact, PEG makes the surface of liposomes more hydrophilic and induces a repulsion that attenuates protein binding. However, several studies report that systemic administration of PEG-liposomes induces intense production of anti-PEG antibodies accelerating the elimination of nanoparticles.

This gave rise to the idea of creating ProteoDNAsome: the biomimetic nanoparticle developed by an international research team coordinated by Sapienza (Rome), in collaboration with the University of Technology of Graz in Austria and Utrecht University in the Netherlands.

This nanoparticle is composed of three distinct compartments: lipids, DNA, and proteins.

Lipids constitute the most inner layer, the core of the nanoparticle, that is coated with DNA with a dual purpose: functional and structural. Indeed, DNA allows the expression of the protein of interest in the target cell for the treatment of specific diseases, but at the same time its negative electrical charge attracts specific plasma proteins that form the third layer. It is this last protein compartment to deceive the immune system allowing the nanoparticle to permeate longer in the body.

The result is a nanoparticle that retains its synthetic characteristics in vivo and is able to evade the immune system more effectively than PEG-liposomes.

“Coating the nanoparticles with an artificial protein crown made of human plasma proteins,” explains Giulio Caracciolo of the Department of Molecular Medicine at Sapienza University, “allows to drastically reduce uptake by leukocytes and to prolong the circulation of lipid vesicles in the body, thus increasing the therapeutic efficacy of drug treatment. 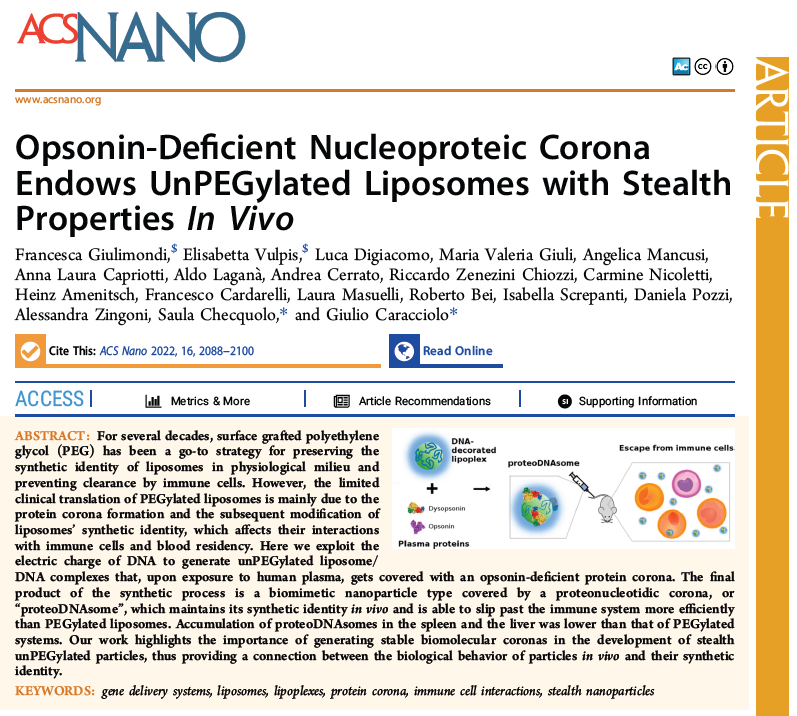